The blades on the Rotex Brush Aerator are staggered, reducing wear on the low maintenance drive unit

Energy isn’t cheap. We all know that.

In today’s energy-conscious world, we find that our clients are increasingly aware of the importance of environmentally-compliant solutions that offer the lowest cost of ownership. This demand for lowest whole life cost solutions has led to the birth of our new brand, Totex.

Totex is a new word. It doesn’t appear in many dictionaries – yet.

Totex is short for Total Expenditure. Our clients are well-acquainted with Capex (Capital Expenditure) and Opex (Operational Expenditure). Now, Totex brings these two concepts together; it is the whole-life cost of ownership. Totex includes costs that are often overlooked: such as maintenance, spares and downtime. For many years, we have recognised the importance of this concept, and have taken care to ensure that our clients understand the significant benefits of energy-efficient and low-maintenance Totex equipment.

For those of our clients in the wastewater sector, Totex is already becoming a household name. Ofwat, the water industry regulator, has enshrined Totex in its guidance for the current financial period: AMP7.

The Totex challenge is not an easy one. With so many factors to consider, finding the true lowest whole life cost solution for your application can be a time-consuming and tedious process. This is where Corgin can help.

Corgin are fanatical about the Totex brand. So much so that we will compare and analyse costs and efficiencies for all equipment options before making a recommendation to you. Our thorough research helps you to calculate the true cost of ownership, and sometimes exposes misleading claims made by other equipment manufacturers. In short, we look at each solution from your side.

Our Totex calculator is highly regarded by consultants and end clients alike – a useful tool for determining the true whole life cost of ownership and payback on investment.

Totex pays for itself, time and time again. Every time.

Corgin go the extra mile to offer you the best Totex solution.

We are exclusive UK distributors for some of the world’s most efficient technologies in the waste and wastewater sectors. Our range of Totex solutions includes aeration systems and air blowers; mixers and flow inducers; scum removal systems; odour control systems and dust suppression systems.

The photo links below will direct you to the Totex solution relevant to you. 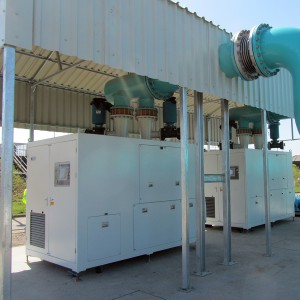 By the time we were invited to our first meeting with the main contractor, final tenders had already been submitted and initial assessments completed. We were the 8th company to tender on a requirement for two aeration blowers for a large UK wastewater utility company – and a late entrant at that. Our offer quickly gained interest however, primarily for its exceptional energy efficiency. Tenderers were quickly thinned down to three serious contenders, and then down to 2. From nearly missing an opportunity to quote, we were now one of only two in the picture.

In the technical discussions and negotiations which followed, it became apparent that there was confusion over the use of shaft power data rather than ‘wire power’ data in energy calculations. By working through the figures from first principles, it could be made clear to the client that our blowers were indeed more efficient than our rivals – by some 8.5%.

Needless to say, the contract was awarded in our favour in spite of a

marginally higher capital cost. However, this slightly higher initial outlay was quickly overtaken by calculated power savings of some £30,000/annum.

For your own success story – choose Totex. It pays, every time.